The university told the judging panel they put “students and staff success at the centre of what we do, with tremendous effect. We’ve been unabashed in our strategy to recruit students.” They have experienced a record number of students this academic year where text-based communication is a vital part of their recruitment tactics.

The University of Essex was finding that dealing with international student enquiries via traditional methods, such as email was a very slow and drawn-out process. They were receiving a high volume of emails that were bouncing between the enquirer and representatives as one question leads to another, and so on and so forth. Therefore in total, it could take a couple of weeks to fully answer all of an individual’s questions. This wasn’t efficient enough when deadlines were looming for the applicant.

Live online chat software was introduced into the University of Essex’s International strategy in 2015 in the form of Meeting Rooms. The instant communication channel allows multiple participants, regardless of location, to engage in a digital environment such as a question and answer session or as part of virtual open days.

The University of Essex would send out an email to potential international students, inviting them to an online meeting in the nearby future. In the session, the participants could ask questions which other students could also review the information. The aim of this was to reduce the number of duplicate enquiries the university received.

The initial implementation of Meeting Rooms proved to be an incorrect strategy to take. Essex found that their participation uptake rate was extremely low, as potential students didn’t want to wait 2 weeks to ask their questions, so they contacted the university via other methods in the meantime.

Therefore, when the new CRM Officer took over the responsibility for the communication channel and reviewed the results, it was decided that they should revise the strategy and use Meeting Rooms for international students that have been accepted by the university. This has increased the uptake rate as the purpose is better suited to the students’ needs.

The meeting rooms were later adapted to hold sessions that were tailored to the students based on their country, allowing them to converse with other individuals going through the same experience as them. Welcoming groups enable students to digitally meet each other before physically starting at the university, helping them to settle in more easily, than if they were alone.

This then did leave a gap in the strategy for finding a method to handle International enquiries more efficiently. Therefore one-to-one chat has also been introduced within the International section of the university’s website allowing potential students to enquire in a quicker manner.

The university ran a week-long trial of one-to-one chat that was available 24/7. Doing this proved worthwhile as the channel proved popular and gave Essex enough data to analyse in which they were able to identify the optimum times of when to run the service.

They now run chat as long as they possibly can in a 24 hour period, ensuring they operate a consistent service between 8am and 10pm. In one year they experience around 46,000 chats just from the international section of their organisation alone. The communication channel helps them to compete in streamlined markets and gain more leads.

Essex is then able to convert these leads as their ethos of being friendly and less formal shines through the chat. Not concerned about duration times, representatives will leave the chat open as long as necessary as enquirers may take longer to understand and/or translate their responses. Using the system in this manner helps the university to build a rapport with the potential student they can portray via their customer service what Essex is really about.

Online chat software has allowed the university to implement another communication channel into their spectrum. This allows students to choose their preferred method when contacting Essex; however the popularity of the chat service has enabled a 71% growth within the university’s team.

The ease of the system allows the university to allocate extra staff resources when the dedicated team needs additional support. This is particularly useful during Clearing.

Congratulations to the institution on being named the University of the Year. For more information regarding Essex’s implementation contact our team on 01268 524628. 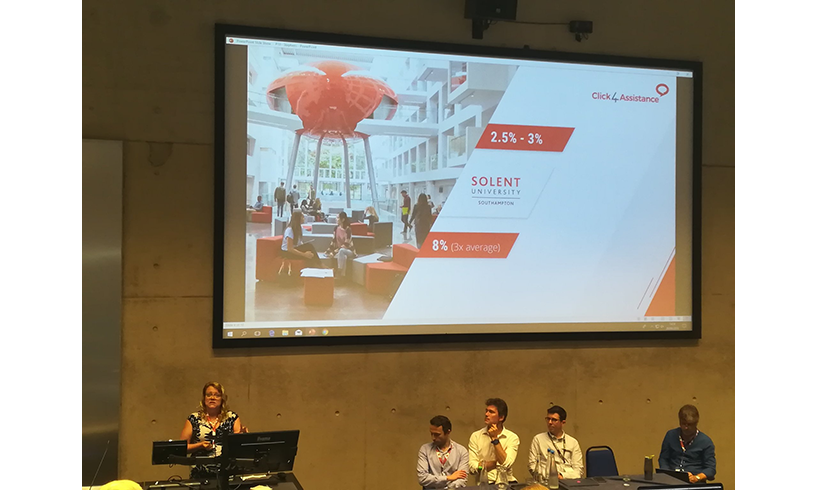